Love the idea behind this, and it seems to tick a lot of boxes that I like to cover here.

The blurb on the holding page makes the point that “making the right choice is difficult, especially if you don’t have support and reinforcement from the people you trust.”

Temptd looks like it might be an iPhone app that uses the herd power of social networks to strengthen your willpower in the moments you need it most, like when trying to lose weight, or give up smoking.

In a previous incarnation this might have just amplified the influence of those who you already know – so that mates could give you support for giving up smokes on demand, even if they’re not there. But anyone who’s worked on a government-related behaviour change brief knows that the influence of existing networks (family, friends, work, neighbourhood) isn’t always benign. In fact, it can often have an actively negative effect.

I think Connected is just the latest in a long line of literature on this topic (sure it isn’t the latest by now, but you get the idea).

Where Temptd goes further is to connect you with a community of people who are facing similar challenges. Allowing people to make a public contract with others doing the same thing makes you far more likely to succeed. That’s why Weightwatchers and the AA work so well for many people – the embarrassment of being seen to be failing is more motivating than purely doing something for your own good.

Temptd also taps in to the new opportunities of scale to marrying specialised supply with niche demand – it’s never been easy to create communities of interest, and now new technologies make those communities more accessible than ever.

I think tweetwhatyoueat is a great example of this. 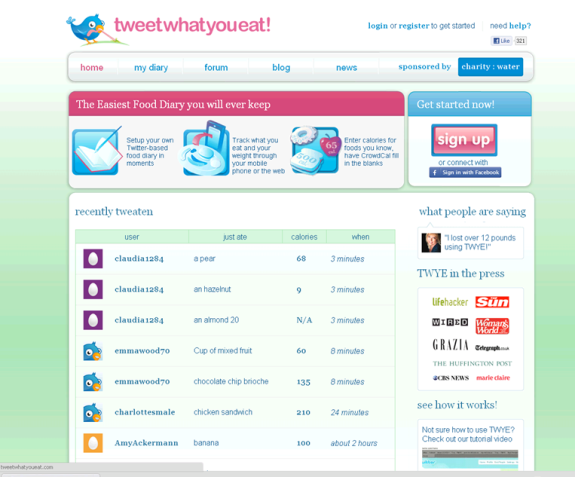 On top of all that, it even incorporates principles of fun and play into the activation, knowing that reframing something as participatory makes it more compelling than it otherwise would be. As the blur states, Temptd intends to “use game play to make it easy and fun to make smart choices, track your progress, and compete with others for willpower and karma points.”

Which puts me in mind of this brilliant thing that I first saw about a year ago. It’s well-known so didn’t warrant a post on its own, but seems to fit well here.