Retail: time to change up? 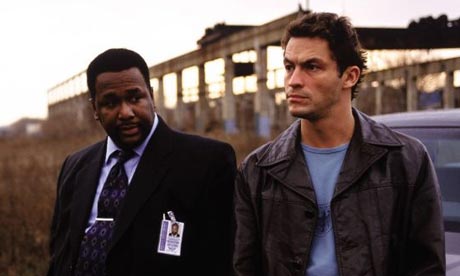 Like many others, I love The Wire. I totally buy the comparisons made by critics with the 19th century novels (Dickens, Eliot, Balzac, etc) – a sprawling urban backdrop, the socio-economic complexity, the narrative trajectories following a vast range of characters.

I guess the bit that fascinates me isn’t so much that a writer like David Simon would entertain such ambition to emulate the episodic story-telling of his literary heroes using the modern medium of TV. It’s more that he was able to achieve it, when he was so reliant on so many people other than himself to execute his vision.

The novelist has only himself, and maybe an editor to provide some objectivity. The creator of a TV show has to ensure his true intent remains intact once filtered through a host of other writers, directors, actors, and production staff, let alone the network suits who might want to bend his/her vision to something they perceive to be more commercially viable.

A positive view of this is that creativity – as I myself have argued here before – comes directly from the process of interaction, that it is democratic at heart, and that the end product is as good as it is precisely because of the contribution from list of people above (apart from, perhaps, the suits).

The idea of a defiantly singular vision, let down by the way others have executed it, is something we’re probably all familiar with. People can, sad to say, let you down. But I wonder how Simon managed it. I’m guessing he surrounded himself with the right people, trusted them (and showed them as much), empowering them as integral to the process of bringing to life what until what it was given to them remained something abstract on a page.

If you don’t want the people you hire to let you down, then great care must be taken, not only with the selection of those whom you entrust your great vision, but also how you facilitate their implementation of it. People aren’t machines, and neither are they mind-readers. If things aren’t working organisationally, then it might be less down to the people within the structure, than to the structure itself, or indeed how well they understand their role within it.

I was thinking all this about The Wire a couple of weeks ago, when I was shopping.

Good shopping experiences are like well-realised TV shows – rarer and more difficult to control than you’d think they would be. Specifically, I’m thinking of the kind of customer service you receive in shops. John Lewis, one of the places I visited, to return something, is clearly an one of the few to get it right. Everyone is engaged in and focused on the overarching job. I’ve never quite found the connotations of quality and premium suggested by Never Knowingly Undersold to be quite right for me. It’s more the security of knowing the staff will respond just as you’d hope they would.

And that’s largely down to their employee-owned status. Everyone who works there has an invested interest in doing their best.

But it’s something you never see in their advertising. Why is that?

I’ve become similarly comfortable when going to my local Specsavers in Wood Green, to the extent that I actually look forward to having to go. I did the decent thing the other week and filled in a form that said so – then was flooded with schadenfreude as the Vision Express opposite (from whose very particular unpleasantness I’d defected years ago) was pretty much empty.

Hooray for good service, I thought. It works. But if that’s so, why do so few retailers get it right? And why, when they do, doesn’t it become the thing they most want to talk about in advertising? Why, when it’s all that people really want when they go to a shop, don’t brands very often communicate service commitments? I can imagine many brand managers thinking that ‘retail’ or ‘service’ aren’t sufficiently sexy as ‘propositions’, but it must be more than that.

I reckon it comes back to that difficulty of being able to count on people, to guarantee what the service will be like in every single outlet someone could encounter. The ‘consumer promise’ is one that’s just too hard to keep.

But this is madness, surely? All industries are service industries these days. Online businesses are learning to provide a paradoxically personalised level of service, to the extent that many are adopting the Dell model of identifying reputation issues through Buzz Monitoring and responding accordingly.

If only in-store staff were empowered to be so proactive!

Retail will have to change, and soon. Its model assumes very little has changed about marketing and consumerism generally. (Surely customer dissatisfaction increases in line with our sense of entitlement, fuelled by on-demand services available virtually everywhere else?). It says: you want what we have to sell? Then please come to our one-size-fits-all designated space where we service the requirements of everyone who else who also happens to what what we have to sell.

Most retail innovations since its invention have focused on customer convenience – and whether that’s mail order catalogues or amazon it’s pretty much the same dynamic, whereby service becomes automated and receipt of the product is separated from the customer’s purchase.

A new retail model would reflect the level of personalisation customers now expect, having been held at arms length for years, assuaged by endless opportunities to browse, change their mind and generally be in control. Perhaps the new atmosphere upon enteringing  a shop would be: thank you for finding the spare the time to come to us, we hope to make it worth your while.

But this, of course, requires retail businesses to think differently about the way they empower their staff. There’s loads of fantastic examples of how retail environments are being used to create playful and surprising stimulus for customers. But I think I’ve only recently realised that the people who most need the stimulus are the staff. If organisations can provide interesting things that prompt staff to initiate conversations with customers, they’ll be making a good start. The ways to do this are legion (offers, decor, technology, events – check Mary Portas’ show on Channel 4 at the moment for lovely, bespoke ideas), but to me it’s clear that if businesses want to engage customers, then they need to start with their own staff.

At MEC we’ve done research into this. The engaged employee is way more valuable, motivated, effective. And there are a number of simple communications mechanisms that so many organisations miss. Show them new advertising first. Get them involved in content creation. And, yes, reflect what they do in your advertising.

After Christmas, the marketing weather vane tells of dropping budgets and an uncertain future . Outreach activity will be stretched. But what if those budgets are being used to answer the wrong question? Does it fix the leaky bucket – for every new customer brought in for the first time does another one leave forever?

It’s a tough call to stop investing in new customers and focus instead on existing staff. But the creators of The Wire did just that on TV. They found a way of helping their employees to create the best  possible work, and in the process served a dedicated fanbase who’d found just the kind of premium experience they were looking for.

And how good does that sound in the current climate?