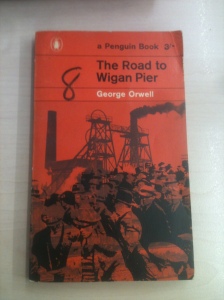 Talking once with a miner I asked him when the housing shortage first became acute in his district. He answered, “When were told about it.”

We think and act differently when we see ourselves in relation to others.

The outside world is a mirror. It helps us work out who we might really be. This miner’s community only recognised that the squalor they all took for granted wasn’t universal when they let the outside world in.

What was normal was re-defined forever.

I can’t imagine a paradigm shift this fundamental in my life.

The internet is the great revealer. We understand ourselves relative to exponentially more alternative experiences.

As social animals we react accordingly. We have a bigger, more varied audience, and we present ourselves differently too.

We all do it. Our online persona is never more or less than what we’d want other people to assume it to be. That’s not always edifying – see Scott’s great post on the reductive consequences of that for us all.

But it’s a world of possibility. Unlike Orwell’s unnamed miner we’re not waiting for the outside world to crash in on us. We’re proactively modifying our identity in order to engage with it. William Gibson called ‘dreaming in public’ part of the writer’s job description – increasingly it’s what we all do when we type out words to appear on the internet.

Pew Research recently released a paper on Teens, Social Media and Privacy. It’s fascinating how self-conscious and adaptive  young people are. In one review, another researcher described the consequences of this on young people’s behaviour in social channels.

“Over the last few years, I’ve watched as teens have given up on controlling access to content. It’s too hard, too frustrating, and technology simply can’t fix the power issues. Instead, what they’ve been doing is focusing on controlling access to meaning. A comment might look like it means one thing, when in fact it means something quite different. By cloaking their accessible content, teens reclaim power over those who they know who are surveilling them.”

Interpreting meaning, not just information, is one of the challenges brands and businesses face when engaging with audiences online. That’s part of the paradigm shift that businesses have experienced.

I heard Cindy Gallop talk recently. She titled her presentation ‘The New Normal’ – encapsulating the inverted model of consumer control and the need for brands to engage with their customers’ interests.

In reality, brands have always existed in the eye of the beholder. But new technology has let the outside world in.

To paraphrase the miner,  brands have been ‘told about it’.