Recently I went through a great pitch experience.

The intensity and focus of the previous few days were over. All the thinking and energy and ideas had been compacted down into the form of a presentation. Everything burst out into the room during an adrenaline rush that lasted less than 45 minutes.

It was actually rather exciting.

Afterwards we tried to articulate how it had felt, in that room. Since we did that in the pub, however, moments of clarity were rare. Certainly, they were short-lived.

Nevertheless, memories of the pitch ricocheted around. For once they sounded less like war stories and a little more like insights that might actually have some value.

We talked about the four hour conversation on the Sunday that none of us dare leave for fear of breaking the spell, so close were we to ‘enlightenment’ (don’t open the curtains! briefly became our newest refrain).

We talked about the bold and brazen idea that came from that conversation – two words that started echoing around the agency immediately. They were quoted back to me by Monday morning so I  knew we on to something.

We talked too about the leanness of the deck and its design, and of our argument. Everything was an exercise in keeping exposition to a minimum.

Whatever the outcome of the pitch, our output – and our experience in getting to it – had had a purity about it that epitomised…well, something, even if I wasn’t immediately sure what. A way to bond as a team? A new way of working? Tangibly, viscerally exciting work? Whatever it was, I’d like to have bottled it so everyone else in the agency could have experienced it.

As the boss said, he and I both still pub-bound: “Everyone thinks they know what good looks like. Very few people know how it feels.”

As someone who now thinks they do, I have spent no small amount of time trying to explain it to others. The drive has been part obligation, part evangelical impulse. Obviously my descriptive powers fall short, so I find that I keep coming back to three reference points. They are all designers, each of whom we talked a little about during the pitch. I am not a designer, by any means, but the process and presentation of our work is always better if we keep design principles close at hand. Few things are more inspiring at that moment than a tough problem solved with aesthetic elegance.

So where these people who provided such design inspiration?

I once met the head of innovation at Heatherwick Studios, a exceptionally clever and very nice man called Stuart Wood. We were at a conference. Chancing my arm I asked him to come and speak at my then agency, MEC. Incredibly, he agreed. He talked about the bus, the cauldron, the bridge (no, not that one) and the pavilion. Many MECers told me it was the most inspiring thing they’d heard there. He left quite an impression. 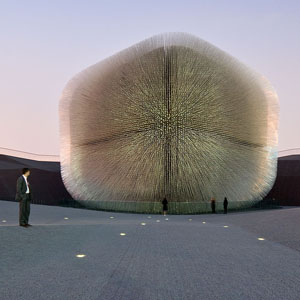 He also left countless quotable insights into the way the studio worked. Including this:

I thought about that line as we recalled our four hour conversation on the Sunday. It was Stuart’s dictum in practice, even though we’d done it back to front. We were two days out, the work was good, but it didn’t have a centre of gravity. We’d started drawing too quickly. (It happens.)

We had some unfinished talking to do. One person called it, another knew it, everyone else settled in. This wasn’t about process. There was no squirrelling away working on our own links in the chain – the strategist’s proposition, the creative’s big idea, team-mates divided by a common language. This was about one thought. It was collaborative thinking out loud…just some pen and paper…for hours…only one cup of tea in all that time…someone bruised their leg from sitting in the same position for so long…and then there it was. The air crackled.

Creativity thrives on contrasting views, but creating something together thrives on shared belief. Consensus takes time and discipline, especially when a hundred other things are calling for your attention.

But that day I learned there is no substitute. Find the people, the time and the space and get talking.

Simple is really hard. Short is hard, too. It’s one of the most important things we can learn, though. Saying more with less. Distilling meaning, not reducing it. Ideas don’t come hard boiled, you have to do that yourself. Our idea, by the end, was hard boiled. A lot of discussion and thinking had been compacted down into it. It stood for an awful lot but was contained within two words. It could have been printed on a T-shirt. In fact, it was. We may still have one somewhere…

Peter Saville, like his sleeve designs, is stylish and effortlessly enigmatic. Nothing is explained. Everything just is. Style is substance. Or rather (turn your head 90 degrees to the left), style is…

The first album I ever bought (on cassette) with my own money had a Saville design. So did the first vinyl LP. I’ve listened to Saville-designed records so much I’m struck by synaesthesia. The music is Saville’s design, and vice versa. So using Transmission by Joy Division in the presentation carried a certain expectation in my view. Fewer words, fewer charts, a leaner thrust to the argument.  It was an exercise in removing the unnecessary.  The idea presented itself. Not that we didn’t speak – we had to tell the story, but the idea, all two words of it, had to stand on its own. Like it would have to in the real world.

That leanness and aesthetic approach created some storytelling pressure. We had to know our stuff. The charts relied on the right segue expressed in the right way. The images had to be spot on. Everything did.

It was a pleasure to present. It was right, too, in the way that the covers to Closer or Technique are right. It was also effortless, despite, or perhaps because, of the effort that had gone into it. It must have seemed so obvious to the client. I remember wondering whether this is why everyone thinks advertising is so easy – because everyone works so damned hard to make everything so graspable within moments.

Three things I really enjoyed and found valuable. Three designers whose MO seem to capture precisely what if felt like.

The Heatherwick maxim that encourages conversation, discovery and consenus.

The Hamnett style that demands brevity.

The Saville philosophy that demands simplicity.

I hope this doesn’t read as self-congratulatory. It isn’t meant to be. It was simply an intoxicating and perhaps even enriching experience that I’ve tried to record in writing.

And really, apart from the experience, there isn’t much to congratulate ourselves about.

The client decided to choose another agency.

So we didn’t win.

But we gained an awful lot.